As September sun ripened grain,
barns brimful with ample harvest,
Great-Grandmother's house emptied.
Four brief lives--ten, eight, six, and two--
buried green before their goldenness.
Battered so, she stayed on
for husband and remaining son;
not only lived but leapt into the abyss
of creation twice more and flew--
another boy, then Carrie, miracle
to mother forty-three, father, fifty-nine.
When this cherished child of her bosom
quieted forever when only eight,
Christina endured like limestone,
dark velvet cloaking shards of a heart
never again trusting life or love.

Gram, married at seventeen,
mother of five, practical nurse,
outlived husband, son, and siblings.
Kept her own house until betrayed
at ninety by brittle bones.
Life narrowing to borrowed room,
living on malted-milk tablets,
quietly she withered, as sweetly
fading as the fragrance of her flower.

Gangrenous leg amputated at ninety-eight,
still she struggled against the dark angel,
declaring herself too wicked to die.
There, there murmured the family,
petting away the nightmares,
remembering the woman who
wrestled laundry in a wringer washer,
canned beans and preserved fruit in
steam-filled summer kitchen,
brought light, flickering kerosene
illuminating endless darning.
Maybe someone should have asked,
Why do you think yourself so wicked?
Struggle between faith of her mothers
and dogma of daughter so tenderly caring,
grateful when the screaming stopped.

SuzAnne C. Cole, former college English instructor, enjoys being a wife, mother, and grandmother, traveling, hiking, and writing from a studio in the Texas Hill Country. She’s been both a juried and featured poet at the Houston Poetry Fest and once won a haiku contest in Japan. She’s also published essays, short fiction, meditations, and plays.
at 12:01 AM No comments:

Sprawled on grandma’s bed
across the quilt her grandmother made,
the little ones nap after an August lunch.
Cheeks flushed, eyelashes shadowy
as spider threads on silk,
their thumbs creep to rosy lips
pursed, already sucking.
The angels-unaware haven’t yet learned
they are the fifth generation to race
screaming with joy in the back yard
crammed with roses and apple trees.
After their naps they play
on the flagstone patio
under conversation of uncles and aunts.
They will only realize when much older
that the grandma who makes up
silly stories and sings in her funny
cracked voice played on these same
garden paths while visiting her grandmother.
The grown-ups, sipping cold drinks
and mopping up little-finger spills,
watch time speed in the sturdy bodies
of the babies.

Visit to Grandmother's House was originally published in Above Ground Testing, 2005

Patricia Wellingham-Jones is widely published with an interest in healing writing and the benefits of writing and reading work together. Twenty years ago she got fired up about genealogy and wound up researching, writing and publishing five family histories.
at 12:01 AM No comments:

When the witch trials started up north
in Salem, Sarah was already heavy
with Jeremiah, their ninth child.
John thought back to when he was whipped
for idleness and flirtation as a young man
and shuddered, thinking how much
worse the allegation might have been.

Now even Governor Phips's wife
and shipmaster John Alden, son of John
and Priscilla, stood accused. Would
it never end? The Andover witches
all offered the same account: the devil
was a small black man who made them
renounce their baptism and sign his book.

Sarah hoped to God no witches would
ever be found in Plymouth. The baby
was due in August, the time to cut
wheat and rye. Had it been a mistake
for the Old Colony to join Massachusetts,
where the witches flew and cried? She
wondered, throwing corn to dappled swine.

John and Sarah Bumpus, 1692 was previously published in Blue Unicorn.

Lucille Lang Day is the author of eight poetry collections and chapbooks, most recently The Curvature of Blue (Cervena Barva, 2009). She has also published a children’s book, Chain Letter, and her memoir, Married at Fourteen, will appear from Heyday in 2012. Her poetry and prose have appeared widely in such magazines and anthologies as Atlanta Review, The Hudson Review, The Threepenny Review, and New Poets of the American West (Many Voices, 2010). She lives in Oakland, California, with her husband, writer Richard Levine. Her website is http://lucillelangday.com.
at 12:01 AM No comments:

My Uncle Robert (said my dad),
now he was somethin’!
He knew words, could
convince you of anything.
Helped me with that prize I won
in the fourth grade.
To tell the truth, he pretty much
wrote the whole thing.

He had a phonograph with a big horn.
Used to sit out on his porch,
play it so loud
you could hear it all up and down the street.
All the pretty girls would listen
at their open windows.
They’d been just waitin’ for him to come out
with his record machine.

Uncle Robert was an inventor, too.
Had a workin’radio
and a telescope for seein’ stars.
He’d invite the neighbors to take a look
and he always told the women:
‘You have to lie down in the grass with me.
That’s how it’s done.’

He got some takers, too.

Carol Brockfield has been doing family research for almost fifty years now, way before the internet brought us armchair genealogy.

She is the current chair of the Rogue Valley Chapter of the Oregon State Poetry Association, and her poems have been published in The Hiss Quarterly, The Cimarron Review, Women Writers, flashquake, Quite Curious, Verseweavers, and Napa Valley College anthologies. A former New Yorker and Californian, she now lives in Southern Oregon.
at 12:01 AM No comments:

The Strength of Roots

The Strength of Roots
Patricia Wellingham-Jones

A forgotten graveyard, tumbled
remnants of a pioneer's home,
the white flaking fence and crumbled rails
long overruled by brambles and vines.

Great and grand parents are here,
chiseled in stone, their small blocks
in cool grass beckon sit and rest awhile.
Not, we hope, forever.

We find the site, once discovered,
lost again, an infant's final resting place
tenderly tucked in the roots of an oak, marked now
by acorns and a tangle of thicket, while

in town by the brick church
and colonial pilasters, exterior aisles
of well-trimmed boxwood, hovering yews, a marble
sarcophagus rules the rolling green.

My cousin and I tiptoe around the
cold box, trace with warm fingers
the weathered inscriptions, try to
understand what somebody said about
our obviously honored ancestor,

imagine him (with his barely mentioned wife)
in snug leggings and waistcoat, cradling the baby
who lies under the oak, siring all those others
who, two hundred years later, became
my cousin and me.

The Strength of Roots was previously published in The Lucid Stone, 1997.

Patricia Wellingham-Jones is widely published with an interest in healing writing and the benefits of writing and reading work together. Twenty years ago she got fired up about genealogy and wound up researching, writing and publishing five family histories.
at 12:01 AM No comments: 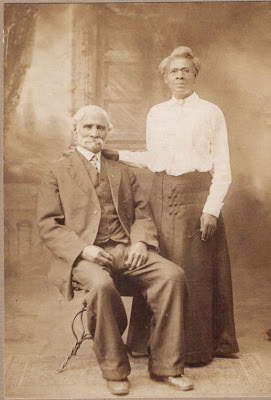 
Stern white hair, walrus
mustache—three piece suit
that might be in style now
if you don’t follow fashion—
hands in lap, on studio chair
in Sunday best. “He’s not
related to us,” my mother said.

His wife’s standing—
mother’s mother’s grandmother
and my great, great—
with her fourth man
(no one knows what
happened to 1, 2, and 3).
She, gold spectacles (no smile),
starched blouse (no lace),
sleeves long to wrists (big cuffs),
cameo at her throat,
skirt dark to the floor,
gray hair bundled, tied back,
arm on his shoulder,
black, black skin,
not a wrinkle in sight,
her Indian blood (Cherokee, Ozark)
holding her up—though she
must be seventy.

This Kansas woman
is as far back as my family
can go. She stands well
(photo faded, 1890 maybe)
unbending, no slave crouch,
looks straight, straight
on great grandsons,
and great, great, greats,
with no shame.

My mother bragged
about her prairie store,
horses and surrey,
the cash in her drawers,
had a copy of her will
with our cut right
there in black and white
($500 was a lot of money in those days),
stolen away by no good cousins
before the funeral day.
No. 4 has no name, but
“Elizabeth Taylor Milton”
she belongs to us.

They stare out, unmoved,
wait for the camera to finish.
I stare back,
search for clues
stare at the shadows.

Anthony A. Lee, Ph.D. teaches African American history at UCLA. He is the winner of the Nat Turner Poetry Prize for 2003 (Cross Keys Press). His first book of poems, This Poem Means, was the winner of the Naomi Long Madgett Poetry Award for 2005 (Lotus Press). Some of his translations have been published in Táhirih: A Portrait in Poetry: Selected Poems of Qurratu’l-‘Ayn (Kalimát Press, 2004). He teaches a poetry workshop sponsored by the Creative Arts Center, City of Manhattan Beach, Califonria.
at 12:01 AM No comments:

Email ThisBlogThis!Share to TwitterShare to FacebookShare to Pinterest
Labels: Lee Anthony A

He's bought himself a bit of ground, an', Lord, he's proud an' glad!
For in the land he came from that is what he never had.
Now his kids can beat his writin', an' they're readin' books, says he,
That the children in his country never get a chance to see.

He's taken out his papers, an' he's prouder than a king:
"It means a lot to me," says he, "just like the breath o' spring,
For a new life lies before us; we've got hope an' faith an' cheer;
We can face the future bravely, an' our kids don't need to fear."

He's taken out his papers, an' his step is light to-day,
For a load is off his shoulders an' he treads an easier way;
An' he'll tell you, if you ask him, so that you can understand,
Just what freedom means to people who have known some other land.

Note: This poem may be semi-autobiographical.  Edgar Guest was born in England, in 1881, and became a naturalized citizen of the United States in 1902.
at 12:01 PM No comments:

Languages barter for directions.
Until the tines of a rake clear lines in the gravel,
extracting a map from here to the Stone ages.

Seated on the crest of a barley field, a dolman.
8 split stones knee deep in soil. Inward,
backs bent like pall bearers, suspending monoliths above the underworld.
I see the two of us in procession, wading through the green.
The soil cracking with thirst underfoot.
Divining hearts probe the source and reason for us.

We climb to sit touching
our masks wrapped in black, grey and gold.
Gazing at the boundless, shivering stone.

Oracle of sounds.
Purse your lips and tongue against a lur,
marshal truth, frighten lies. Protect us from mere mortals.

Charles Carr is a native Philadelphian, born and raised in Southwest Germantown. Charles attended LaSalle College and Bryn Mawr College, and has a Master's degree in American History. For 35 years Charles has worked in social services, developing programs and advocating for the needs of abused and neglected children. Charles has also completed missions to Haiti and he is active in raising awareness and funds for Haiti. In 2009 Cradle Press of St. Louis published Charles's first book of poetry: paradise, pennsylvania. Charles has been published in various local poetry reviews and is the 2008 First Prize Winner for the Mad Poets Review. Haitian Mud Pies, Charles's next collection of poems will be completed in December 2011. Charles is married and has one son.
at 12:01 AM 1 comment: